Cocoa Vs Cacao – What is the difference? 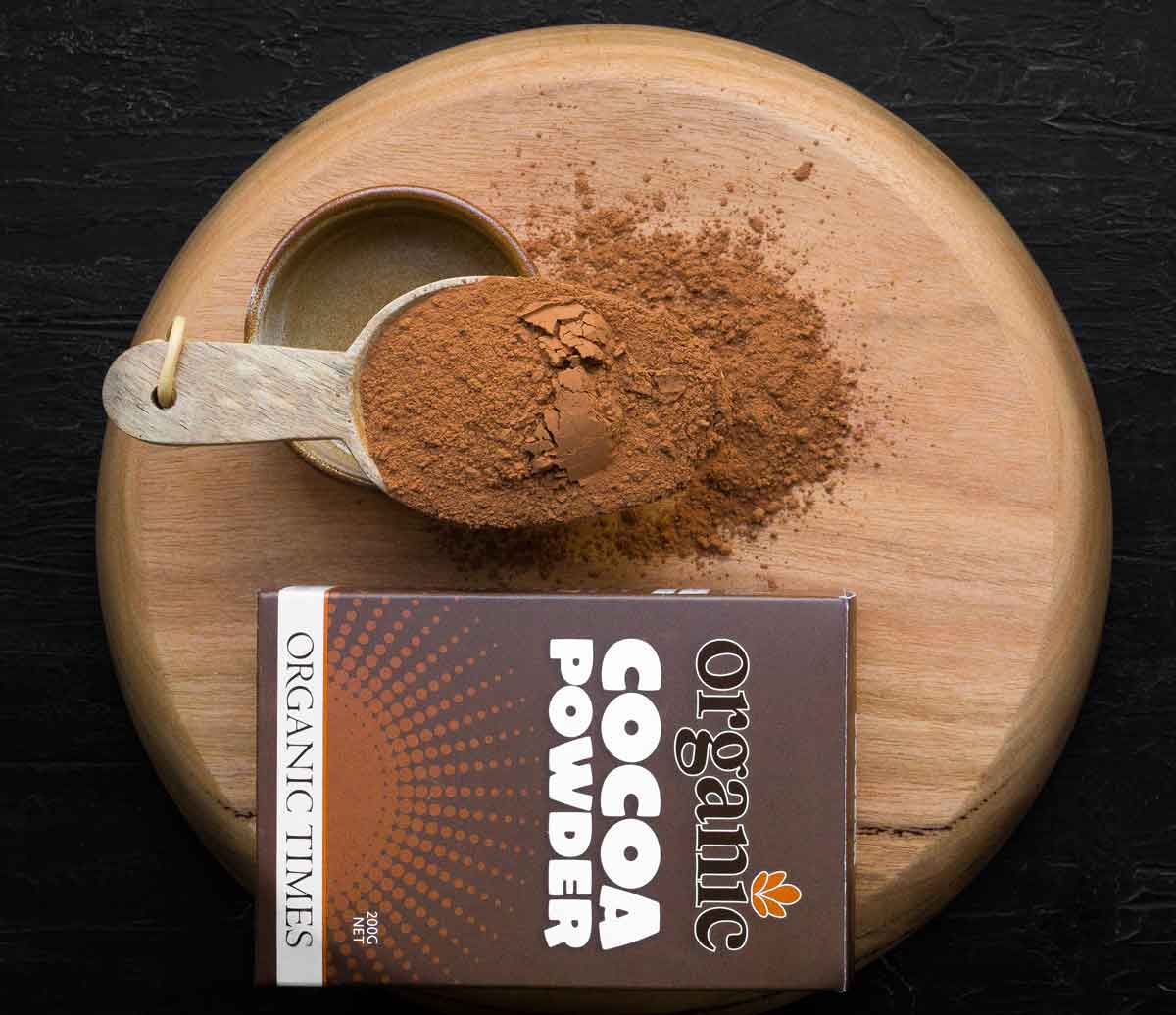 Cocoa Vs Cacao – What is the difference? What does ‘Dutch-process’ mean exactly and how should it be used?
We answer these questions and more. Read on as we untangle the confusion of this fantastic bean that Mother Nature intended for us to enjoy.

You say tomato, I say tomahto. You say cocoa, I say cacao. Some people assume there is a difference between cocoa and cacao. Surprise – they’re actually the same thing! It appears in our information-overload modern world, that the truth behind cocoa powder has become shrouded in mystery.

Once you understand the linguistic roots, what’s revealed is, cocoa and cacao are two different words for one loved-by-all food. The facts have simply become lost in translation – several times. Not just as cacao made its entry in the English language, but as food trends have evolved and a lot of the marketing for cacao food products has blurred the lines.

It’s time to unravel the tangled web of the word ‘cocoa’ once and for all.

The term ‘cacao’ is derived from the Olmecs – the pre-Mayan culture which thrived in the lush tropical lowlands of what we know of today as south-central Mexico. They were the first known civilisation to create a beverage from the pods of the cacao tree. And, of course today, it’s used by millions to step away from the world, sip cocoa and live in the moment. Ahhh, decadent serenity.

The word and the drink were passed down from the pre-Columbian cultures to become a part of the Spanish language. Cacao in Spanish means cocoa. In fact, there is some evidence to point to the term ‘cocoa’ in English starting out as a misspelling of cacao.

In the Spanish language, cacao refers to both cacao and cocoa, however in the English language, the two terms can be used interchangeably – as long as you take the meaning of an American cup of cocoa out of the equation. Furthermore, in America, cocoa is specifically used to describe a cup of drinking chocolate.

What is the difference between alkalized Dutch-processed and non-alkalized cocoa?

Where there is a difference is in the use, or lack thereof, of an alkalizing agent. With non-alkalized cocoa, the nibs are ground into a powder without any alkali ingredients. The result is a light brown powder with a bittersweet, slightly fruity taste.

Dutch-processing refers to the use of an alkalizing agent, such as potassium, magnesium carbonate, sodium bicarbonate, oxide, or ammonium, which is usually added along with water. What an alkali does is raise the pH of the cocoa. Dutch-processing creates a darker, richer flavour and the resulting powder is more easily dissolved in liquids – making it ideal for drinking chocolate. 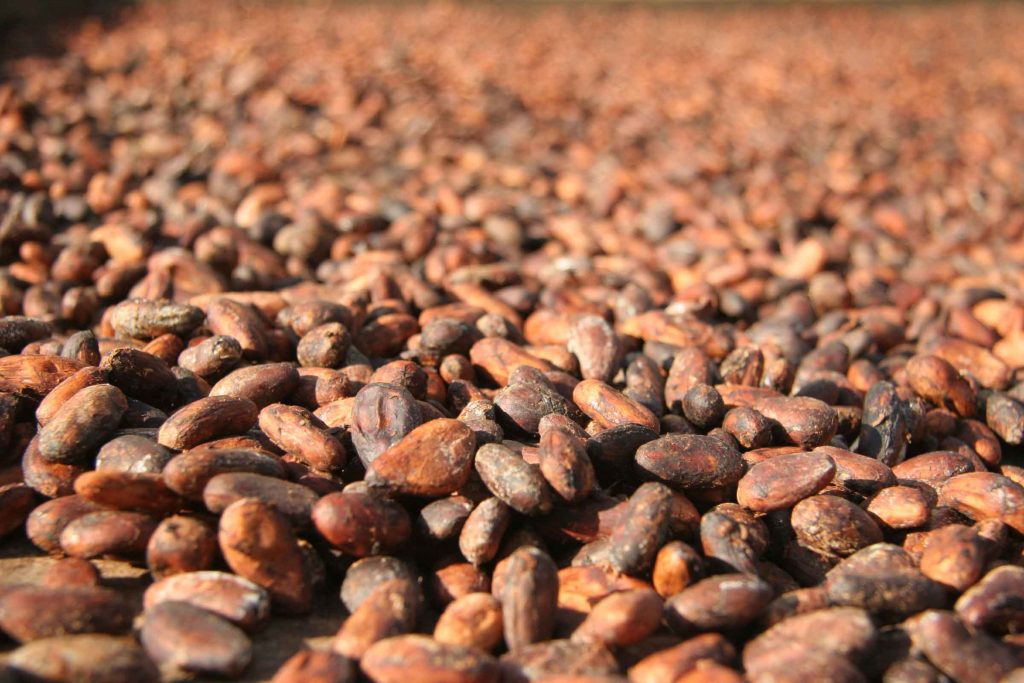 What about raw cacao beans?

This is where a lot of the confusion exists today. Until the raw food movement, all cacao powder on the market was referred to as cocoa powder in English speaking countries. Before the introduction of the raw cacao marketing concept, all cocoa/cacao powder was distinguished as either alkalized (Dutch-processed) or non-alkalized.

Then, as the interest in a raw food diet blossomed, manufacturers of raw food products basically re-introduced the original, authentic spelling of beans from the Theobroma Cacao tree and started calling their cocoa products ‘cacao’ to refer to raw, unroasted cocoa powder as opposed to roasted beans.

For more on raw cocoa powder go to our FAQ’s page.

So, to sum up all this useful information, the basic rule to apply when choosing your cocoa/cacao is not to look at the name on the packaging but rather to see how it has been manufactured. Now let’s go into how cocoa/cacao is best used:

Our organic Dutch-processed cocoa powder comes from Germany and is made from fair trade beans grown organically in the Dominican Republic. Because of where we get our cacao beans, we should call our powder cacao powder, yet as an Australian company, we’ve chosen to use the term cocoa powder as we offer a Dutch-processed product in an English speaking country.

The beans are collected, fermented, cleaned, roasted, pressed and milled. Then, they are enriched with potassium as an alkalizing agent. Our cocoa powder is:

A blend of standardised and raw material, our fair trade organic cocoa powder has a smooth, less bitter flavour and an irresistible aroma. Soluble in warm water and milk, it’s perfect for making drinking chocolate and for use in your favourite chocolate recipes. It is a good source of antioxidants and decadently delicious.

We adore our cocoa powder – it’s fair-trade, organic, and made from beans grown in one of the lushest regions of the world to yield that extra smooth taste.
Pure sustainable cocoa goodness.

How to best use non-alkalized, Dutch-processed cocoa powder

Dutch-processed cocoa is known for having a mellow flavour with soft earthy notes. As it’s no longer acidic it won’t react with baking soda, an alkaline leavening agent, when baking. It does pair well with baking powder, which has a neutral ph. So, for recipes that call for baking powder as a leavening agent, you’ll want to use Dutch-processed cocoa. If a recipe calls for both baking soda and baking powder, use whatever cocoa the recipe calls for to make sure you get the right alkaline-acid balance in your baked goods.

For creamy chocolate desserts, such as ice cream, pudding, and custards, Dutch-processed cocoa powder will give you a richer, more chocolatey flavour and colour than non-alkalized cocoa. It won’t impact the texture, giving you a wonderfully velvety chocolate mouth feel.

For your cocoa beverages, Dutch cocoa is widely used because it is more soluble and because of the less acidic flavour. When playing around with your cocoa recipes, remember Dutch-processed cocoa has a slightly earthy, richer flavour profile, which pairs well with nutty flavours, nut milks, and vanilla.

But you can use your organic cocoa powder however you like. Dreamy drinking chocolate as a coffee alternative? Go for it! Love those banana choco smoothies in the summer? So do we! Want a rich and creamy chocolate dessert to wow your friends? We’ve got just the cocoa you need.

Have fun creating, sipping and melting away in cocoa bliss. That must have been what Mother Nature intended when she made the fantastic cacao/cocoa bean!

Happy Easter! Stay well, stay safe and have a wo

Celebrate Easter and beyond with this classic and

Happy Easter! Stay well, stay safe and have a wo

Celebrate Easter and beyond with this classic and

If purchasing Butter from our online store, you are agreeing to the following:

The use of online promotional codes is subject to the following terms of use:

Prize: 1 x Organic Times + Australian made products valued at over $190.